Something for the Weekend (28th - 30th September) 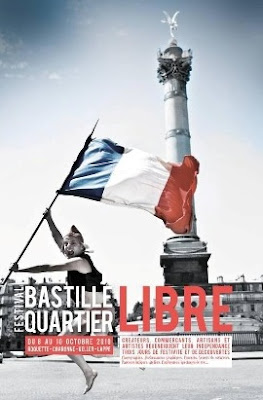 Some suggestions for things to do in Paris this weekend.

Bastille Quartier Libre festival
Organised now for a third time, this annual festival aims to celebrate the independant traders, artists and craftspeople of the Bastille district (although why a hairdressing and wine selling chain are involved remains a mystery). Events are taking place in shops, galleries, workshops, bars and restaurants across the area on Saturday and Sunday, with one or two highlights. Most interesting might be the brunch organised on the rue des Taillandiers. The street will be closed on Sunday and covered with grass, and the restaurants and traiteurs of the area are preparing 'brunch boxes' that you can eat as a picnic on the grass!

Love Life Parade
The Bastille district will be a busy place this Sunday. Alongside the Quartier Libre festival the Place de la Bastille will also be the starting point of the Love Life Parade, a Solidarité Sida (AIDS) charity event. The parade will be a procession of thirty floats, each of which will be a stage for live music performances by many of France's leading bands and artists (Skip the Use, Zebda, Naive New Beaters). The procession begins at 2pm, with an arrival at Opéra estimated at around 7pm (via the Rue de Rivoli and Palais Royal).

Portes ouvertes des atelies de Menilmontant
It is a curiosity of the calendar that during the Biennale de Belleville there should also be an open days weekend of artists' studios in the area. Whilst the Biennale de Belleville focusses on international artists and wants to put Belleville firmly on the world map of art, this event is more a celebration of local amateurs. As usual with these events though, the art is almost secondary to the opportunity it offers to visit bucolic courtyards which are normally hidden behind closed doors.

Going back in time at the Hotel de Ville
Nine giant screens, each 10 metres across, will be installed on the Place de l'Hotel de Ville this Saturday evening, displaying virtual images of the history of Paris.

5,000 years of the history of the city will be displayed on the screens, mixing docufiction recreations, aerial views and 3D images. To get a better idea of what this might entail, watch the trailer!

Posted by Adam at 11:42 AM No comments:
Email ThisBlogThis!Share to TwitterShare to FacebookShare to Pinterest

Something for the Weekend (September 21st - 23rd) 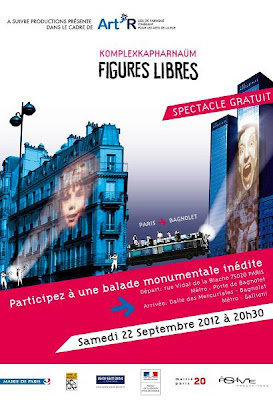 It's another very busy weekend in Paris. Here's a few suggestions to help your plan your time carefully!

Park(ing) Day
Park(ing) Day started in San Francisco in 2005 and has since then spread across the world. It is a kind of anti-car 'Occupy' movement, encouraging people to find alternative uses for parking spaces in cities. A number of events are being organised in Paris and across France on Friday, including picnics, parties and pop-up art galleries, with the event HQ being set up alongside the Palais Brogniart (Bourse).

The Fête des Jardins
Every weekend seems to see some kind of fête or other organised in Paris, and this weekend is no different. Indeed, there are at least two, including this event that aims to get people into the city's parks. The most interesting thing about this particular event is not the activities organised in the public parks, but rather the access it gives to unseen gardens, mostly surrounding religious buildings on the left bank.

A full list of gardens taking part can be found here.

Whilst you're in some of these parks, you may notice that there are bandstands that never seem to be used. A festival, Kiosquorama, running throughout September and October is trying to put them to good use, organising free concerts with up and coming French bands each weekend. Visit the official site for a full list of parks/concerts: http://www.kiosquorama.org/

Fete de la Gastronomie
The other 'fête' this weekend is to celebrate French food (as if it isn't already being celebrated every day of the week). A whole host of events is being organised across France this weekend, including tastings, cooking lessons, special offers in restaurants and many other things that have probably been fully booked for months.

See the official website for full details: http://www.fete-gastronomie.fr/en/events/. Typically, although an English version of the website is available, it only translates the section titles and headers, not the descriptions of the events themselves. But then all visitors to Paris speak French don't they..?

Figures libres - an original night-time walk
Paris and the surrounding towns often seem completely divorced from each other, so it is interesting to see an initiative that attempts to stitch them together. Figure Libres, organised jointly by the town of Bagnolet and the 20th arrondissement of Paris, is an organised walk through the streets of the two areas. Featuring giant projections of the local residents on surrounding buildings, including the twin Mercuriales towers, and performances in the streets, it should offer an interesting perspective on a fascinating part of the city.

Click here for full details, including meeting points and times.

Spectaculaire + 1st birthday of La Rotonde
La Rotonde restaurant and bar, housed in an old Ledoux tax collection office on the bassin de La Villette, will be hosting two parties this weekend. On Friday evening it will be celebrating its own first birthday. On Saturday and Sunday it will be the focal point of the annual Spectaculaire festival, an event which promotes upcoming cultural events in Paris with live performances and special offers.


Festival America
A biennial literature festival, held in Vincennes, celebrating writers from the 'Americas'. Readings, discussions and signings are held across the town throughout the weekend.

Nouvel An Belge
As the official website says, after the Russians and the Chinese, the Belgians will be celebrating their new year...

Held across the 18th arrondissement, it is of course a celebration of Belgian creation, particularly the country's music scene. You might also find beer and frites on sale during the events!

Full details here: http://www.nouvelanbelge.com
Posted by Adam at 10:50 PM No comments:
Email ThisBlogThis!Share to TwitterShare to FacebookShare to Pinterest

Something for the Weekend (September 14th - 16th) 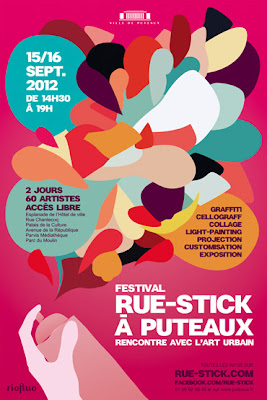 This weekend marks the real return to normality in Paris - and therefore the return of Paris Weekends! There's a lot happening in and around the city, so make sure you plan carefully!


The Journées du Patrimoine
France's annual heritage days weekend always offers a host of interesting possibilities. On the Invisible Paris blog I have listed the 10 I'm most looking forward to.


The Techno Parade
I have been in Paris long enough to remember the first edition of this procession of electronic music (in 1998), and it has changed a lot since that time. Originally an event to promote an alternative music scene, it has become more and more mainstream, with the parade dominated by major labels and the largest radio stations. Under the title 'Renew' this year though, organisers hope that they will be able to go back to the roots of the event, and find a more underground angle. This may not be the case on the parade itself, but you'll be sure to find this spirit in some of the official and non-official 'off' events organised in bars and clubs across the capital.


The Battle of the Music Festivals
This weekend you'll find not one but two music festivals in the Paris area. One clean and chic in the Parc de Bagatelle gardens to the west of Paris, and one a little less polished to the east. I know which one sounds the most fun to me.

We Love Green
Positioning itself as an enviromentally friendly - or neutral - festival, We Love Green will feature sets by artists such as Charlotte Gainsbourg and James Blake alongside dry toilets and organic food vans.

Fête de l'Humanité
Ostensibly an event to raise money for the French communist party and its mouthpiece, the L'Humanité newspaper, the Fête de l'Humanité is today better known for the quality of artists it draws and the comparitively cheap ticket prices. New Order, Peter Doherty and Patti Smith will be performing, alongside chemical toilets and greasy burger vans!


Rue Stick
Is there also room for a street art festival in this busy weekend? Yes there is! Rue Stick began as a guerilla movement, attacking en-masse blank walls across Paris (as featured on Invisible Paris), but today they work closely with towns who invite them to decorate their streets for a day or weekend. This time round you'll find them in Puteaux, at the feet of the La Defense towers.


Posted by Adam at 10:51 AM No comments:
Email ThisBlogThis!Share to TwitterShare to FacebookShare to Pinterest
Newer Posts Older Posts Home
Subscribe to: Posts (Atom)