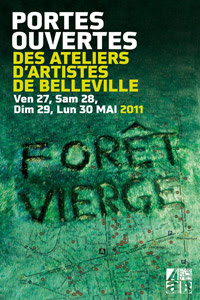 Posted by Adam at 5:36 PM No comments:
Email ThisBlogThis!Share to TwitterShare to FacebookShare to Pinterest

A Little Paradise in Paris 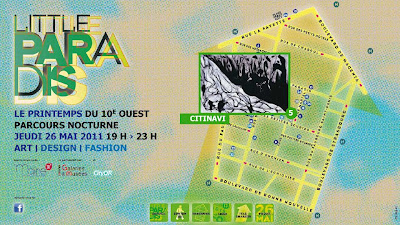 Also taking place this evening (26th May) is an event called 'Little Paradis' which hopes to draw people's attention to the burgeoning artistic scene around the Rue de Paradis in the 10th arrondissement.

Galleries, ateliers, studios and shops will be open until 11pm this evening, and naturally local bars and restaurants will also be taking part in the event.

For the full programme, see the official website: http://www.littleparadis.fr/
Posted by Adam at 10:19 AM No comments:
Email ThisBlogThis!Share to TwitterShare to FacebookShare to Pinterest

Accessibility Night: discovering just how unaccessible Paris can be! 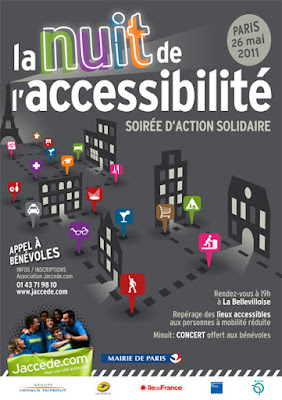 Thanks to Mary-Kay for pointing out an interesting initiative in Paris this week. The 1st Nuit de l’accessibilité on Thursday May 26th,organised by the Jaccede association, aims to be a fun and festive event where volunteers will learn about the difficulties of life in the city for the disabled.

Meeting up at La Bellevilloise in the 20th (but hopefully not on the top floor via that rickety staircase), volunteers will then head out across the city in search of the good, the bad and the ugly, all the while sharing their findings via smartphones or live on the Jaccede website.

Finally, the evening will end back at La Bellevilloise with a free wine and live music!
Posted by Adam at 5:07 PM 2 comments:
Email ThisBlogThis!Share to TwitterShare to FacebookShare to Pinterest 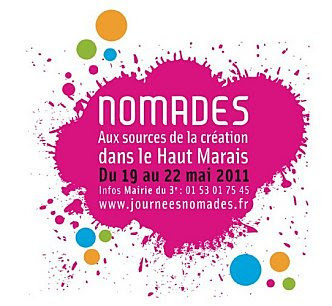 Now that Blogger seems to be working correctly again I can once more add a few suggestions for weekend activities in Paris. Over the next few weeks I'll also try to add a few more themes, including 'restaurant and bar of the week' based on suggestions I can find around the web, and a 'Take a break from Paris' theme which will suggest awayday destinations from the capital you might like to try.

Journées Nomades
The northern edge of the Marais definitely seems to be its cutting one today. How else can you describe an exhibition of drawings on pieces of toast using only Nutella? To celebrate the creativity of this part of the 3rd arrondissement, a weekend of events, called the Journées Nomades is being organised. Basically it is divided into three themes; visits to places of creation (galleries and showrooms), visits to places where things are made (ateliers and studios), and visits to places of culture and knowledge (museums, churches, bookshops).

For the full programme, see the official website: http://www.journeesnomades.fr/

Fete de la Nature
Every weekend seems to bring some theme to celebrate, with the subject this week being 'nature'. The focus this year is on forests, so for the major events you'll need to head out to the Bois de Boulogne or the Bois de Vincennes. For example, a visit is being organised at the Jardin d'Agronomie Tropicale (tiens...) on Sunday, as well as a more general exploration of 'urban forests' starting from the Parc Floral on the same day.

The full programme can be found here: http://www.fetedelanature.com/

117 Hours of Chemistry
As part of a larger 'Science sur Seine' festival which runs until June 26th, this event, based on the 117 elements in the periodic table, will investigate the role of chemistry in our lives, through a series of exhibitions, theatrical events, visits to universities and laboratories, and walks, including one retracing the life of Marie Curie.

Rooftop Tennis
The annual French Open tennis tournament begins this weekend, and to celebrate the event, a pop-up (clay!) tennis court has been set up on the roof of the Galeries Lafayette store. If you're lucky or time your visit right, you may get a free lesson and the chance to hit a few balls (but hopefully not down to the people below), otherwise you'll have to make do with the Rolland Garros themed shop selling t-shirts with crocodiles on them. At the very least though, it should offer an interesting photo opportunity.

(nb - I have small children which means that I don't get out to restaurants much, and when I do, they invariably feature kid's menus and play areas. For this reason, I can give no personal opinions on these suggestions - they just sound interesting to me!)

La Cave de Daron
Opposite Le Chateaubriand and Le Dauphin, this 'bar à vin' has friendly and helpful staff and a cool atmosphere in the evenings. More information here.

Chartres - Celebrating perfume and light!
Chartres - less than an hour from Paris by train - is having a double celebration this weekend; the beginning of a week-long Fête du Parfum, and the launch of the annual Chartres en Lumière initiative which lasts until September 17th. Visit the town by day and sample a 'fragrant' meal in a local restaurant, then stay until the illumination of the 27 buildings and sites in the town, where this weekend live music will also be played.

Something for the Weekend (6th – 8th May) 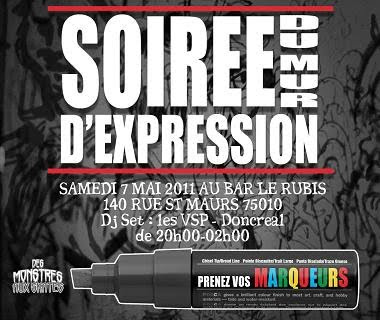 More bad luck for Parisians this weekend – another public holiday lost because it falls on a Sunday! Whereas May 1st is sacrosanct though and many museums and other facilities were closed, expect far more widespread opening this time around (apart from the municipal museums).

Body Shops
A new exhibition began this week at one of the city's leading photography galleries, Les Douches La Galerie. Juraj Lipscher’s 'Body Shops' is a fascinating and discomforting look at a selection of sites where the human body is both central and absent, from maternity wards to the crematorium.

Read my review of the exhibition on Invisible Paris, where you will also find details about the location and opening times.

Faites l’Europe
The 8th of May commemorates the end of the 2nd World War in Europe, and the 9th celebrates the economic and political links across the continent that followed this event. To mark this date, a weekend of events will be organised on the square in front of the Hotel de Ville, including live music, films and theatre.

The full programme of events can be found here.

Soirée le Mur d'Expression
Feel like expressing yourself this weekend? Alongside the nice venue, live DJ and good company, the Des Monstres aux Skates collective (they spray monsters...on skateboards!) will be setting up a giant wall that anyone will be able to contribute to.

Rues du Monde
Rues du Monde is a festival of musical events at La Villette, but its also a free festive event being held in the Grande Halle. The month-long festival is divided into four themed weekends, with this week's named Rue Flamenco. Brazilian bar and restaurant are running the events at the Grande Halle, and alongside the live music and dance shows, you'll also be able to sample caipirinhas, paes de queijo, smoothies, beer from around the world and street food from Brazil and the rest of the world.

More details can be found here.

Les 10 ans du Marché des Enfants Rouges
The Marché des Enfants Rouges is the oldest surviving market in Paris, so it seems somewhat strange to be celebrating its 10th anniversary. Before marking its 400th birthday in a couple of years though, the stall holders have chosen to celebrate the rebirth of a spot that was almost demolished a little over a decade ago.

Several days of events are being organised, giving you the opportunity to win a selection of prizes going from baskets of produce to weekend breaks, or simply just to (re)discover the market. Full details here.
Posted by Adam at 4:40 PM No comments:
Email ThisBlogThis!Share to TwitterShare to FacebookShare to Pinterest
Newer Posts Older Posts Home
Subscribe to: Posts (Atom)