Something for the Summer


Paris Weekends is mostly away from the city for the summer, so rather than the weekly recommendations, you will find here a list of the principal activities on offer in Paris this July and August.


Paris Plages has now become a traditional summer rendez-vous in the city. In the last couple of years it has also spread out to the Basin de la Villette which offers a more laid back atmosphere and more emphasis on water sports (and a crazy golf course this year!). The event runs from July 20th to August 19th, and you'll find full details on all activities here.

Of course, this initiative has also lead to imitators around the world, some of which can be found in the neighbouring towns of Paris. Two examples this summer:


A 'plage' is not just somewhere to go when the sun shines though, but also at night. La Plage at the Glaz'art bar near La Villette offers concerts, DJ sets and petanque throughout the summer.

Staying on a water theme, the 'L'été du Canal' festival aims to get people out exploring the Canal de l'Ourq which leads north-eastwards from La Villette. Boat trips are only €1 throughout the summer, and there are a whole series of events - from water sports to live concerts - planned en route.

Cinema under the stars


Despite the recent wet weather, a number of outdoor film events are planned in the city this summer.


The main outdoor cinema festival is held each year in the La Villette park. This year's theme is 'Les Métamorphoses', and runs from 25th July to August 26th. The full programme can be found here.


The Cinema au Clair de lune festival organised by the Forum des Images also aims to get people out watching films under the stars (or streetlights) from August 1st - 12th. The full programme can be found here.

If you're outside Paris, chances are you might find a temporary open air cinema on your route. The Cinesites organisation tries to couple heritage sites with suitable films, and there are plenty of interesting combinations planned this summer!

Several places in and around Paris dress themselves up (or down) for summer, putting on a series of special events. Here is a selection of some of the most interesting:


Wanderlust: Star of the summer (if the sun ever comes out) will certainly be the new Wanderlust installation alongside the Seine. Occupying much of a converted warehouse building (particular the rooftop terraces), it is offering bars (and eventually a restaurant), music, sports and a wide variety of activities. Entrance is free, but bar prices compensate somewhat...

La Bellevilloise: La Grande Prairie is a 500m2 loft with artificial grass, fake flowers and deckchairs, but also a cool venue with cocktail bars, massages and events scheduled throughout the summer.


Several cultural festivals are organised in Paris during the summer.


Paris Quartier d'Ete: The biggest festival of the summer, offering hundreds of events in a wide variety of locations in and around Paris, from July 14th to August 11th.

Music in the park: The Parc Floral remains one of the best places to chill out at weekends throughout the summer. The jazz festival runs until July 29th, when the Classique au Vert classical music festival takes over (until September 16th)
Posted by Adam at 9:43 AM 2 comments:
Email ThisBlogThis!Share to TwitterShare to FacebookShare to Pinterest

Something for the Weekend (July 6th - 8th) 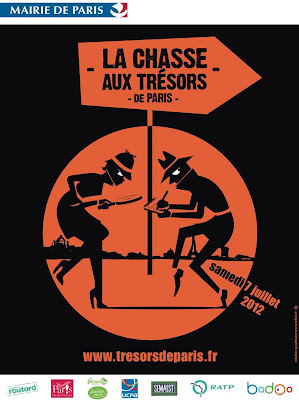 Schools out for summer and the holiday season has truly begun. Here are a few suggestions to celebrate in style.

A City-Wide Treasure Hunt
Is 7 a lucky number? On this Saturday the 7th, the annual city treasure hunt will be celebrating its 7th edition - but don't take that as a clue!

The theme this year is 'Paris city of love', with participants guided by the letters exchanged by two mysterious lovers. To solve the puzzle, you must find the romantic couple's final meeting point.

Organisers promise that participants will be sent "through unexpected, unknown and often surprising locations: hidden gardens, narrow passageways, underground caverns and other secret Parisian nooks and crannies". However, there are several possible pathways leading to the treasure, and the hunt is also open to those in wheelchairs or with pushchairs.

Finally, English speakers need not miss out as the enigmas and instructions have also been set out for them in English.


French Lingerie
As the treasure hunt reminds us, Paris is the city of love, so it seems entirely appropriate that there should be an exhibition of French lingerie taking place at the same time. This show celebrates 100 years of French creations, with displays of historic models as well as more recent state-of-the-art designs.

BitterSweet (Paradise) Festival
From this evening (6th), 10 days of "indie pop folk rock electro" concerts in small venues across the city, as well as more unexpected performances in galleries, cafés and shops.

For more information, including the programme, line-ups and audio clips of the artists involved, visit http://www.baladessonores.com/agenda/bsp2012/

Posted by Adam at 11:47 AM 2 comments:
Email ThisBlogThis!Share to TwitterShare to FacebookShare to Pinterest
Newer Posts Older Posts Home
Subscribe to: Posts (Atom)