Something for the Weekend (3rd – 5th December) 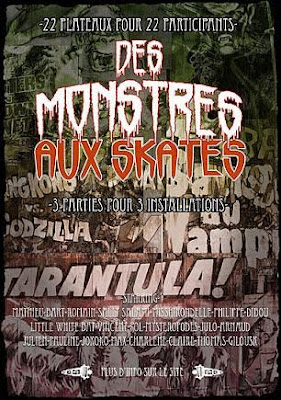 Skating, shopping, soccer and saveurs this weekend. More details below...

Can you describe the exhibition in a few words?
A group of artists using a skateboard as a support and monsters as a theme!

Why this theme and this support?
The idea came to me during the making of an animated film that I was directing. I thought it would be a good idea to reproduce the experience, and to bring together a group of artists, suggest a subject and a format, but without any particular graphic style imposed on them.

Who is taking part?
At first I thought that maybe there would be ten skateboards, but the idea proved to be a popular one, so I added ten more artists, and then another two that will be coming from New Zealand for the final exhibition (note: the boards will be displayed in three groups). Most of the artists come from the world of animation, but there are are also graphic artists, printers and illustrators.

Le PSG a 40 ans
Without giving too many secrets away, the leading football club in Paris was born in the same year as me, so it’s only natural that I should want to share in their party. The city of Paris is also getting involved with a selection of 40 iconic photos (Weah, Ginola, Ronaldhino) in the Hotel de Ville.

Braderie des Editeurs d'Art
Around 40 publishers will be selling some of their stock (books, DVDs, lithographs, post cards) at heavily discounted prices, in the pleasant setting of the Ecole nationale superieure des beaux-arts.

Arty Xmas
Taking place in a converted cardboard factory, this event promises unique, original and affordable gifts from the artists and artisans of Belleville, in a warm and welcoming environment.

May also of interest this weekend
A few more ideas - if you have any others, please let me (and other readers) know in the comments.

Posted by Adam at 5:16 PM
Email ThisBlogThis!Share to TwitterShare to FacebookShare to Pinterest