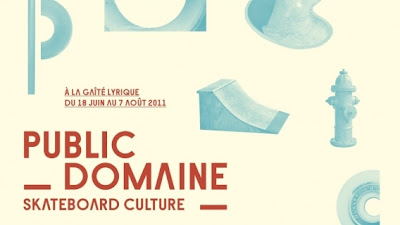 A few suggestions for things to do and places to go in and around Paris this weekend.

Skateboard Culture
For its first major summer theme, the new Gaité Lyrique centre has chosen skateboard culture. Although the links between a 'sport' and a place with a mission to explore digital culture may not be immediately obvious, organisers point out the many artistic spheres skateboarding has influenced, including music, graphics, cinema, photography, fashion and video games. All of these will be featured in one way or another over the summer, and there will even be a mini-ramp in the park opposite for those who want to learn or practice their skills!

For more details on the exhibition (which begins this Saturday), see the official website: http://www.gaite-lyrique.net/en/programmation/theme/public-domaine

Salon Emmaus
Emmaus is a charity that seeks to help the poorest and most vunerable members of society. As a means of fundraising it often organises auctions and sales. The biggest of all is held this weekend at the Porte de Versailles where thousands of bargains (and no doubt thousands of bargain hunters too) will be ready to be snapped up.

Full details can be found here.

More Jazz
Following the launch of the Paris Jazz festival (mentioned last week), two more jazz festivals begin this weekend. At La Defense, the term 'jazz' is used loosely, but the large-scale free events are desgined to attract the largest number of people possible (up to 20,000 people at each concert). The festival begins this weekend with a show by drummer Manu Katché, with guests including Sly Johnson and Finlay Quaye.

At Saint Ouen the jazz is 'manouche' and on a smaller scale, but can be found across the town in the 'puce' markets, in bars and on street corners.

Visits with Architects
Each year, A Vivre, an architecture magazine, organises a series of visits to private houses and apartments that have been redesigned by architects. The visits are run by both the property owner and the architect concerned, giving an insight into the reasons behind the design and how it works in practice. Around 20 properties can be visited in Paris (both this weekend and the following weekend), but the reservation system does seem to be a little complicated. Good luck!

The full list of places to visit in Paris can be found here: http://www.journeesavivre.fr/JAV11/TC_GeneRegion.asp?T=visit&ST=visit&R=PARIS-75

Curio Parlor
This week I discovered a new bar in the city thanks to an invite to an evening organised by Kim at I Heart Paris. A good time was had by all in a nice (but hot!) space just slightly off the main tourist trails. The Curio Parlor claims to be a modern-day speakeasy, but it actually looks more like the kind of place that was probably a swingers club not so long ago, but that's cool!

Pink Flamingo Pizza
The Pink Flamingo is more a take-away joint than a restaurant, but that's perfect because this Sunday it is being used as the feeding station for a 'Pizza picnic' by the Canal Saint Martin to celebrate the first year of the Paris by Mouth website. Get yourself a slice and join in the fun!

Provins – Les medievales
Although just an hour from Paris, a trip to Provins is like a voyage back to the middle ages. At no time is this truer than during the 'Medievales' festival, where the whole town is taken over by minstrels, jousters and hog roasts. Balls and banquets are also organised, as well as presentations and displays of medieval arts and crafts.

Posted by Adam at 4:02 PM
Email ThisBlogThis!Share to TwitterShare to FacebookShare to Pinterest