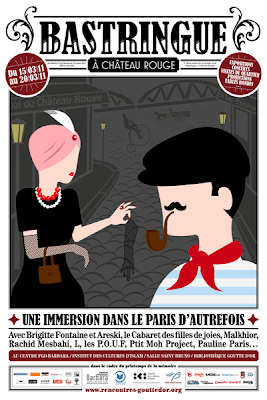 Books Books, Books
This weekend sees the beginning of the Salon du Livre in Paris, but for those who prefer to read in English, the bi-annual English-language booksale held by SOS Help is this Sunday. All hardbacks are 2 euros, and paperbacks are just 1 euro. What’s more, it’s all for a good cause!

Les Maisons Closes
Sylvanie de Lutèce breaks out from her monthly Monday history sessions at the Baron Samedi to propose a weekend of investigations into the theme of the maisons closes (brothels) in Paris. On Saturday evening she'll be giving a conference on the subject (where were they, who worked there, who were the clients as well as many other anecdotes) at the Centre Barbara Goutte d'Or, and on Sunday she'll be leading a walk around the Pigalle area, of course one of the most active parts of the city for this kind of establishment!

These two events are part of the wider 'Bastringue à Chateau Rouge' festival. Click here for full details on the other events being organised.
La commune, 1871 paris capitale insurgée
2011 marks the 140th anniversary of the 'commune', the popular uprising of the inhabitants of Paris against the powers in place. As the commune was proclaimed at the Hotel de Ville, what better place to organise the exhibition that recounts the story of the movement? Including over 200 items which illustrate the dramatic events of the period (including photographs, posters, prints and contemporary press reports) the exhibition attempts to cover both sides of the story.
Until May 28th
Salon d'accueil, 29 rue de Rivoli 75004
Open daily from 10am - 7pm, except Sundays and public holidays
Admission free

Free museums
If you buy a copy of the Télérama magazine this week, you'll find inside a voucher offering free entry to a number of participating museums (across the whole of France) this weekend. For example, a number of special events are being organised at the Musée des Arts et Metiers, or you could visit the fascinating exhibition on the France cruise ship currently running at the Musée national de la Marine.

Saturday 19th and Sunday 20th March
Click here for the full programme in the Paris region.
Posted by Adam at 6:09 AM
Email ThisBlogThis!Share to TwitterShare to FacebookShare to Pinterest