Something for the Weekend (7th - 9th October) 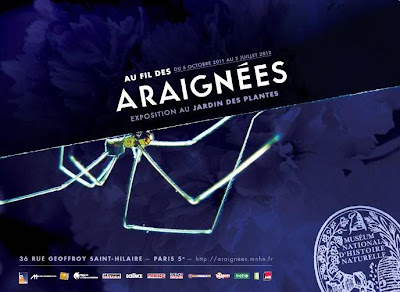 With the end of the unseasonal weather, we can say perhaps that autumn truly begins this weekend. To cheer you up, here's a selection of interesting events around the city that should nevertheless encourage you to get out and about.

A Spider Show
Not a show for the faint-hearted perhaps, but one that may just help even the most extreme arachnophobic to see another side to our eight-legged friends. The "Au fil des Araignées" show at the Musée d'Histoire Naturelle tries to change the public perception of the spider as a terrifying little menace, by showing exactly the valuable role it plays in our eco-systems. On top of that, large-scale photos will also try to convince us that they can sometimes be beautiful too!

Daily (except Tuesday) from 10am to 6pm, entrance from €7 to €9
Muséum d'Histoire naturelle, 36 rue Geoffroy St-Hilaire, M°Gare d'Austerlitz/Jussieu
Until July 2nd 2012

Fete des Vendanges in Montmartre
This year's wine harvest in Montmartre is being celebrated under the theme of 'the islands', bringing a distinctly carribean feel to the butte. Apparently this is the third most widely attended event of the year in Paris after Paris Plages and the Nuit Blanche, so expect big crowds, especially for the parade on Sunday at 3pm.

Until Sunday 9th, at various spots around Montmartre
http://www.fetedesvendangesdemontmartre.com/ 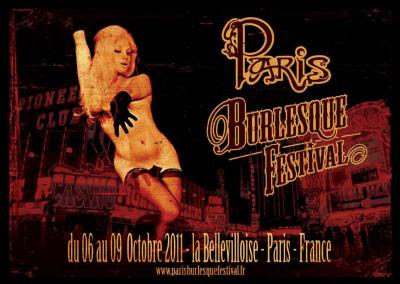 Paris Burlesque Festival
Viva Las Vegas is the theme of this third edition of the festival, meaning an ambience of casinos and caberets at the Bellevilloise venue. As well as the traditional performances and 'burlesque' lessons for willing amateurs, there will also be a series of conferences. Most interesting amongst these will be a walk around the caberets of Montmartre on Sunday morning with the coolest historian/DJ in the city, Sylvanie de Lutèce! Places are limited, but you can try your luck by reserving via histoiredeparis@yahoo.fr

Paris - proche et lointain
Photographer Patrick Faigenbaum, born in Paris in 1954, has long had a passion for the city. Proche et lointain (near and far), his exhibition at the Musée de la Vie Romantique, describes both his personal and geographical links to Paris.

Including family shots, views around the city, snaps of the suburbs to the east, west, north and south, and pictures of the city taken from a distance (Saint-Germain-en-Laye), it's a pictorial love affair with Paris - displayed in the most 'romantic' spot in the city!

L'hôtel particulier - une ambition parisienne
This new exhibition at the Cité de l'Architecture in the Palais Chaillot (Trocadero) aims to tell the history of Paris by tracing the development of large townhouses across the various districts of the city. On Saturdays, the exhibition is enlarged with film screenings on the theme of 'la maison de ville au cinema'. First up are short documentaries about some of the featured houses, and these are followed by a different film each week, including The Magnificent Ambersons, Reversal of Fortune and Dangerous Liaisons.


Take a Break from Paris

Bibracte, in the Burgundy region of France, is an ancient Gaullois capital which is today something of an archeological theme park. Every two years a festival, Réperages, is organised which aims to celebrate the culture of a major European city. After Prague, Budapest and Istanbul, this year Barcelona is the chosen city, which means music, dance and cinema, as well as tapas and a giant paella! A good opportunity to explore this interesting site.

Although not especially far from Paris, it can be tricky to get to on public transport. For the weekend of the festival though, buses will ferry passengers to and from the nearest train stations. Full details at the address below:

http://www.bibracte.fr/fr/magazine/festival-reperages-barcelone_01_03.html
Posted by Adam at 1:43 PM
Email ThisBlogThis!Share to TwitterShare to FacebookShare to Pinterest

Dear...Paris is a amazing place on the earth...i think it is a perfect place for weekend purpose....well guys go this place and enjoying own weekend with lot of happiness...


I have deep interest in writing informative articles on Travel and Tourism India, also given my words to a portal for Holiday In India