The Journées du Patrimoine: My Suggestions

One of the highlights of September in Paris is the annual Journées du Patrimoine (heritage days) weekend, where access is given to a wide range of normally closed to the public locations. Popular opinion will tell you that the event can involve nightmare 2-hour queues to visit some places (the Palais de l'Elysée, or President's residence for example), but my recommendations are a little more out of the ordinary, and I can promise you that you won't queue at all! 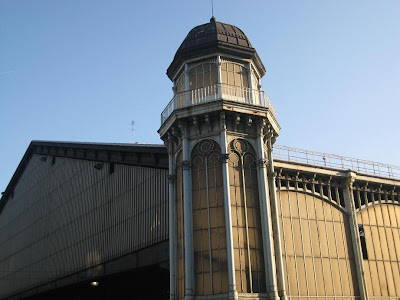 (Re)Discover the Train Stations of Paris
The theme of this year's event is 'le voyage', so what better place to start than at one of the city's train stations? Amongst other discoveries, you'll get a view of the city from the balcony of the Gare de l'Est, and at the Gare de Lyon you'll be able to climb the famous clock tower.

Full details of events can be found here: http://www.gares-connexions.com/fr/gares-du-futur/journees-du-patrimoine-2011

Our Daily Bread
The 'Du Pain et des Idees' boulangerie near the Canal Saint Martin is not only a superb example of a 19th century establishment with its ceramics and painted glass, but also one of the best in the city today. To celebrate the fact that the shop is listed as a historic monument, and also the fact that baker Christophe Vasseur also uses 19th century techniques, the boulangerie will be open for the weekend for a series of events, including the chance to make your own dough!

Mémorial du Bazar de la Charité
Built on the spot of a terrible fire that cost the lives of over 150 members of the aristocracy (with around 95% of the victims being female), this chapel is always open to the public daily. What is more rarely seen though is the memorial section at the rear which explains the tragedy in more detail and celebrates the lives of the victims.

The Musée des MoulagesThe Musée des Moulages Dermatologiques (museum of dermatological casts) within the walls of the Hôpital St Louis is a very private museum and generally open only to students and those working in the medical profession. Featuring casts of real examples of terrible skin diseases, it is rather gruesome, but for historical and artistic reasons, it is also strangely fascinating!

Palais d'Iena
The Palais d’Iena is perhaps the most well-known and well-respected building of the architect Auguste Perret. In wonderful simplicity it manages to combine classical, academical principles with modernist design and materials.

The building was erected between 1937 and 1946, initially to serve as a museum of public works. This initiative was however not very successful, and since 1959 it has hosted the Conseil économique, social et environnemental (French Economic and Social Council). The public is not generally admitted inside the building so the patrimoine weekend offers you the opportunity to view the fantastic interiors, which include an auditorium for 300 people and a monumental staircase.


Maison dite de Marie Touchet
This house, invisible from the street, is a rare exemple of renaissance architecture in Paris. Built at the beginning of the 16th century, it is a mixture of stone and coloured bricks, and divided into two parts. As it is generally only open to the public once a year during this weekend, it is the ideal opportunity to discover this little known building.

22 bis rue du Pont Louis-Philippe, 75004These are just a few of my suggestions, but I'm sure there is something for everyone in the full list of Paris events!
Posted by Adam at 3:20 PM
Email ThisBlogThis!Share to TwitterShare to FacebookShare to Pinterest

We recall vividly the 7 hour wait to see the Palais de l'Elysée, only to find out that it would close about two hours before our section of line could hope to get to the door. Merci for the tips for less sought after venues....if the Senat is open, it also is a wonderful treat!