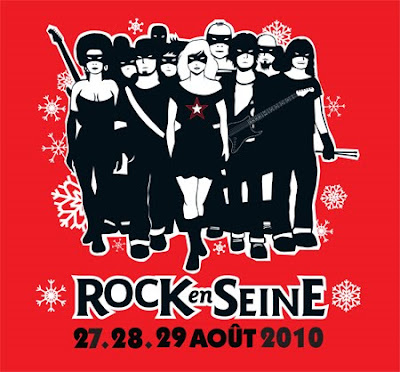 It's already the last weekend in August, and there are many signs that Paris is coming back to life after the summer break. Finding a baguette has become less of a challenge, as has finding some organised events in the city! Here's my selection for the weekend.
Rock en Seine
The last weekend in August is synonymous in the UK with both the Reading festival and the Notting Hill carnival, but in France there has been no similar event to mark the end of the summer. This may well be changing now though with the Rock en Seine festival in Saint Cloud which is now in its 5th year and which seems to get bigger and better each year. This year's bill includes Massive Attack and Arcade Fire, but there is one small problem - the event is sold out! However, if you are quick enough, you may be able to purchase one of the 200 tickets that will be put on sale each morning (27th, 28th, 29th) on the official website.
La Fête de Ganesh
The district around La Chapelle and the Faubourg Saint Denis is home to a sizeable Hindu community, and once a year they gather together to celebrate the god Ganesha. This year the event will take place on Sunday with celebrations first at the Temple de Sri Manicka Vinayakar Alayam, then will continue with a spectacular street parade.
For more details and the itinery, see http://www.templeganesh.fr/fetegan.htm

Le Grand Ramdam
Another community, another celebration. The end of the summer also coincides this year with ramadan, the Islamic month of fasting. As the sun goes down though, feasting can begin, perhaps also to the accompaniment of music. This is the goal of an event at the La Villette park this Saturday, which combines live Maghrebin music with free dates and mint tea!
http://www.villette.com/fr/parc-villette-agenda/spectacles-tous/le-Grand-Ramdam.htm
The Festival Silhouette
Visiting the Buttes Chaumont park is always a good idea, but even more so when special events are organised. This weekend sees the beginning of the Festival Silhouette in the park, a series of concerts followed by projections of short films. The live music begins at 7.30pm and the films at 9pm each evening with the festival concluding on Sunday 5th September.
See http://www.association-silhouette.com/ for more details and the full programme of events.
Posted by Adam at 9:32 PM
Email ThisBlogThis!Share to TwitterShare to FacebookShare to Pinterest

Hindu community. Hinduism is the religion. Hindi is the language. Not necessarily connected. It's like saying all Christians speak English.

Corrected! Thanks for pointing that out.

I'm not even sure what language is the dominant one in the community as I believe many are Sri Lankan Tamils.

In which case they speak Tamil.