Something for the Weekend (6th - 8th August) 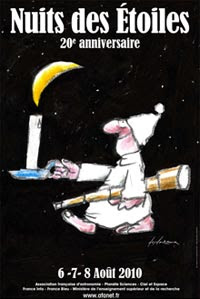 August in Paris is all about being outside - for as long as possible! Here are some suggestions for activities this weekend in the city of lights when the light begins to fade.

Les Nuit des Etoiles
This weekend marks the 20th anniversary of the nuits des étoiles, an event which aims to help people to observe and understand the sky above them. Clear skies are predicted this weekend, but with light pollution it is very difficult to observe stars above Paris, so to get the best from this event you'll need to head out to the suburbs. In the Paris region the two most interesting events would appear to be an observation of Saturn and the summer sky, and a midnight walk in the Parc du Vexin.

See http://www.afanet.fr/Manifestations/Carte.aspx for the full list of planned events across France.


"Breizh Touch" - a Fest Noz at the Hotel de Ville
As part of the music festival accompanying Paris Plages, a special Brittany-themed evening is programmed for Saturday night. Expect plenty of singing, dancing - and cider!
From 5pm
M° Hotel de Ville
Posted by Adam at 2:47 PM
Email ThisBlogThis!Share to TwitterShare to FacebookShare to Pinterest