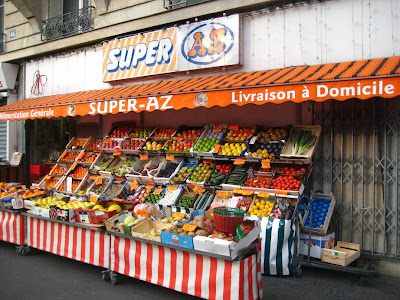 The Independant newspaper in the UK today published an interesting debate on the ever-popular subject of French food and its supposed decline. Arguing that the country's culinary skills are indeed in decline, food writer Rosie Boycott argued that "there's no doubt that something has really sagged in terms of French home cooking", and that "even the markets are more lacklustre than they were".
Arguing against the motion, writer and television presenter Jonathan Meades, who lives in France, pointed out that "there is an elemental contact between food and people. That has not changed. Nor has the extreme freshness of French food".
Both agree on one thing - "There are no fashions in French food. There isn't even much evolution". There may be little new to get excited about in the restaurant scene in Paris, but is that a bad thing when you can always rely on your old favourites?
Personally I'd put myself somewhere between the two parties. I disagree with Jonathan Meades's assertion that "English supermarkets seem pathetic compared to those in France" (has he really ever been to a Leclerc or a Carrefour?), but certainly agree with him about comparisons between restaurants in the two countries. Yes, as Rosie Boycott points out, you can often find a nice pie in a pub in England, but there are very few decent independant restaurants outside of London.
Rosie Boycott and Jonathan Meades will continue their debate on 12 October at King's Place, King's Cross, London N1, as part of the London Restaurant Festival. Perhaps they should try to do the same in Paris - I'm sure the reaction in the room would be quite heated!
If you are one of those who think French food was better in the past, check out Badaude's hilarious Cuisine de Meuh series. You may be surprised!
Posted by Adam at 9:11 PM
Email ThisBlogThis!Share to TwitterShare to FacebookShare to Pinterest

I think I'd have to agree on the consensus of the two writers: French cuisine isn't dead, just stagnating.

I don't think the French cuisine is dead. Nevertheless, The best restaurant in the world is now danish (René Redzepi's Noma). The only French restaurant "Le Chateaubriand " ranks #9. Maybe the French should be more inventive...