Something for the Weekend (8th – 10th October) 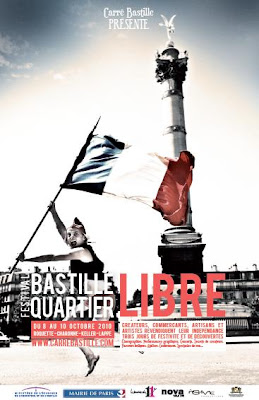 It’s the battle of the districts this weekend as three parts of the city will be competing to attract the crowds to their events. Elsewhere, choose between quiet reflection or bawdy burlesque!
Fete des vendanges de Montmartre
It’s grape-picking time, and in Montmartre, with its tiny vineyard but magnified history, it’s also party time. Over a 5-day period until Sunday, the hillside will be the scene of street parades, markets, live music and activities for children. There may of course also be a drop or two of wine!
The full programme can be found here : http://www.fetedesvendangesdemontmartre.com/
Quartier Libre, Bastille
Another famous district, another weekend of events. Described as ‘le premier festival artistique et culturel dédié aux artistes, artisans et commerçants indépendants du quartier de la Bastille’, the event promises a weekend of themed walks, photo exhibitions, fashion shows, food tasting and live music, all organised by the independant traders and artists in the newly proclaimed ‘Carré Bastille’ kingdom!

Find out more about the association and this weekend’s event here: http://www.carrebastille.com/php/site_festival_infos.php
Portes Ouvertes artistes, Goutte d’or
The artists of la Goutte d’Or, the area alongside Montmartre which was heavily featured in the novels of Emile Zola, are organising their first open doors event for eight years. Once again, such an event is more about discovering a neighbourhood and pushing open the normally firmly shut doors, but there does seem to be at least one genuinely interesting event taking place. The St Bernard church will be the site of an installation of 3D art, with visitors needing to put on glasses to fully appreciate the experience!

Paris Burlesque Festival
From the 6th to the 10th, the Bellevilloise will be the scene of the second Paris Burlesque Festival. A big success last year in its first edition, this year it will have a circus/theatre theme in hommage to the travelling shows in which the Burlesque developed. The event mixes shows, striptease classes, exhibitions, films, debates and DJs!
6th-10th October
La Bellevilloise
19-21 rue Boyer, 75020
http://www.parisburlesquefestival.fr/
Nous ne notons pas les fleurs
I have been fascinated with the concept of the Bétonsalon, an art and research center situated within the Diderot University building in the new Paris Rive Gauche district, but have not yet actually visited the place! The launch of this new ‘event’ this Saturday could give me the opportunity to do so.

Organised by a duo of artists who call themselves bo-ring (Virginie Bobin et Julia Kläring), the project takes a quote from Saint-Exupéry’s Le Petit Prince as its starting point – ‘Nous notons pas les fleurs dit le géographe’ (We don’t record flowers said the geographer). Featuring contributions from a host of people (including the excellent Triple Canopy), the event, mixing films, conferences and performances, ‘reflects on the overturn of history by geography as the main tool to apprehend the post-modern world, through the open-ended metaphor of the desert’.
Vernissage Saturday 9th, 2pm – 9pm, then running until 15th January 2011
Bétonsalon
9 esplanade Pierre Vidal-Naquet, 75013
Rez-de-Chaussée de la Halle aux Farines
Journée mondiale contre la peine de mort
October 10th is the 8th World Day Against the Death Penalty, this year dedicated to the USA which executed 52 people and handed down 106 death sentences in 2009. To mark the event, a series of events is planned. Cities around the world will be displaying 100 posters from international artists calling for the end of capital punishment. Called Poster for Tomorrow, this event will be held at the Musée des Arts Décoratifs in Paris.

Other events in Paris include a photo exhibition at the entrance of the Parc des Buttes Chaumont by Caroline Planque, featuring the faces and stories of people associated with the condemned (partners, parents, priests…), and the biggest flashmob ever organised for this cause!
Full details of all events can be found here: http://www.abolition.fr/
Posted by Adam at 3:21 PM
Email ThisBlogThis!Share to TwitterShare to FacebookShare to Pinterest